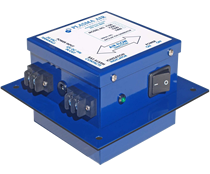 Ions are molecules or atoms that contain an electrical charge, and these ions exist in nature in various sizes.  Small ions only last between 30 and 300 seconds before losing their charge, but they are very active.  Small ion densities range from 900 to 1,100 negative ions and 1,000 to 1,200 positive ions per cubic centimeter (ions/cm3) in ideal "fresh air" environments like at the top of a mountain.  At sea level we typically experience 500 negative and 600 positive ions/cm3. In cities and inside buildings the ion levels drop by 80% to 95% and are barely detectable in small spaces.  As the ion density decreases, so does the corresponding air quality.  By increasing the quantity of charged oxygen ions, air quality is improved to “fresh air” levels.

Air ionization equipment is typically mounted in the central air conditioning system; either in the air handling unit itself or on the main supply ductwork. Millions of ions are formed as air passes over the ionization tubes. These ions travel through the duct system and out into the treated space attacking pollutants where they are most problematic – where we work, learn, live, eat, and sleep.

Much like sunlight does in the atmosphere, air ionization technology produces a natural bio-climate rich in active oxygen molecules, otherwise known as ions. Our air ionization products create a measurable and controllable quantity of positive and negative oxygen ions. The negative ions contain an extra electron while the positive ions are missing an electron resulting in an unstable condition. These unstable ions provide the following benefits:

Contact Hedrick Associates for further details on our air ionization product lines and how this technology can work best for you.